11 Trends in Dining Design for the Next Generation

For decades, the senior living dining experience was marked by capacious formal dining rooms with banquet-style seating, white tablecloths, and little palpable difference in atmosphere from one meal to the next. The result was something consistent and pleasant but static, limited, and predictable. Then came the baby boomers.

The arrival of a new generation of residents with much different dining expectations than their predecessors has changed the way senior living communities design their dining venues. No longer is safe and familiar the preferred path.

“They want choice, they want independence, and they don’t want to be told when to eat, where to eat, and what time to eat,” said Gottfried Ernst, vice president of hospitality for Harbor Retirement Associates (HRA). “Baby boomers want you to mold their dining experience to their lifestyle.”

Randy Bremhorst, vice president of design for Hoffman Planning, Design & Construction, Inc., said members of the baby boomer generation do not expect to alter their habits when they move to a senior living community.

“Boomers want the lifestyle they are used to,” Bremhorst said. “The mentality is, ‘Why should I compromise any of my current experience if or when I move into a senior living community?’”

This shift in preferences has created design challenges and opportunities for communities. As communities begin to more closely follow dining design trends in other hospitality-related industries, such as hotels and restaurants, they are emphasizing variety, choice, and the casual and placing less importance on the formal and tightly scheduled.

Philip Dopson, vice president of design and retail for Morrison Community Living, said the senior living industry has been aware of the pending shift in preferences likely to arrive with boomers, but some communities have been slow to act.

“It’s a conversation that has reached a lot of people in senior living, but it hasn’t reached everyone,” Dopson said. “I think some people are still thinking, ‘That’s still 10 years down the road, and I’m not going to mess with what we’ve got right now.’ But that’s a mistake. It’s time to do something now.”

In light of this shift, experts reflected on 11 design keys to the new senior living dining climate. 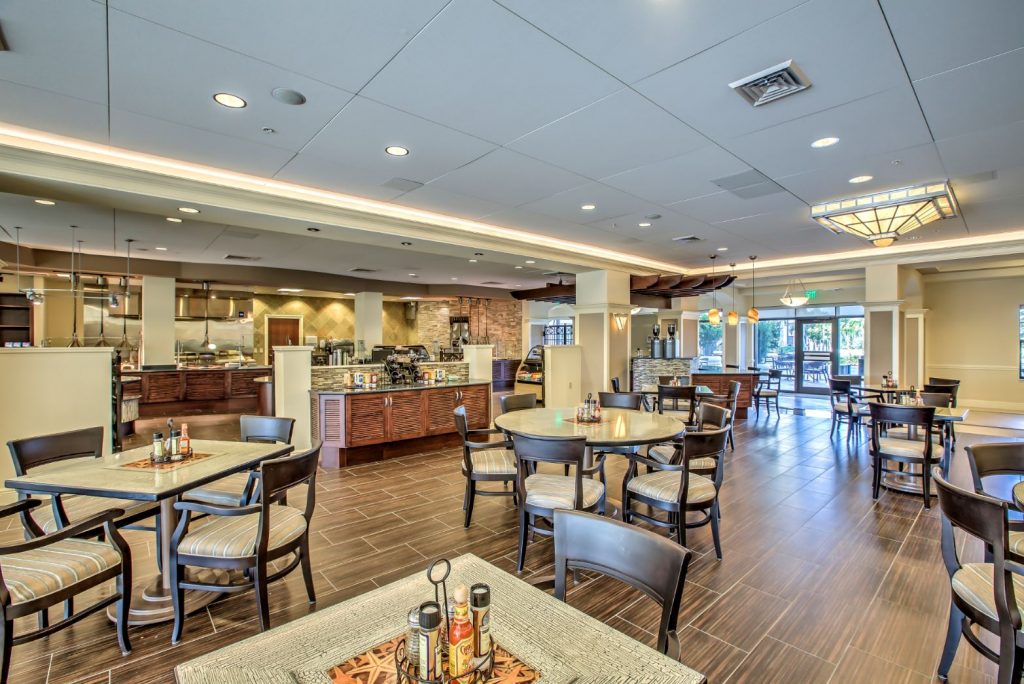 Harbor Retirement Associates has adopted exhibition kitchens to allow residents to watch as their food is being prepared.

The most impactful design change that the boomers have wrought is the need to offer multiple venues of varying styles and atmospheres. Senior living communities across the industry are creating new venues to ensure a diversity of choices for residents. These new venues tend most often to adopt the casual atmospheres of bars, cafés, pubs, taverns, grills, and coffee shops, but communities are also looking at trends such as clusters of micro-restaurants, upscale culinary shops, food courts, marketplace-style venues, and fast-casual offerings, Bremhorst said. Many of these new venues feature extended hours so residents are no longer locked into set dining schedules.

Harbor Retirement Associates has adopted exhibition kitchens to allow residents to watch as their food is being prepared.

“We’re seeing communities push more toward casual or interactive experiential dining,” said Julia Bailey, senior interior designer with OZ Architecture. “Residents are wanting to be able to treat their community dining as they would going into a restaurant, making it more entertainment-based and making a priority of experience over function.”

In the past, Erickson Living, which operates senior living communities in 11 states, might have three or four restaurants on one of its large campuses, said Patrick Plumadore, the company’s vice president of dining services. Today, those same campuses are more likely to be home to up to 12 restaurants, ranging from formal dining to grab-and-go fare. Historically, the main dining room at an Erickson Living campus could seat 250 people. That main dining room is much more likely to have half that capacity today, Plumadore said.

“We know that baby boomers don’t want to just have that same experience,” Plumadore said. “They want to be flexible, so we’ve got to be flexible enough with our designs to accommodate those different experiences.”

Previously, when designing a new senior living community, the dining experience could be simply centered around a large, main dining room. Now, designing dining venues takes more planning and care, particularly to identify the mix of venues that will be a hit with a particular population of residents.

For existing campuses, it can be difficult to carve out new spaces to accommodate the desire for more casual venues, particularly at those communities constructed with the old dining style guiding the design. When done right, though, the rewards are apparent. For instance, Ernst said HRA renovated an existing community in Coral Springs, Fla. by lowering the seating capacity in the main restaurant and transferring it to a new café and bar nearby. Part of the lobby also was converted to accommodate the new dining space. The effort was worth it.

“Our residents loved having that new dining venue—that extra choice for them to go somewhere if they didn’t want a four-course meal,” Ernst said. “It’s really added a lot to the community.”

Opening up the kitchen

One of the more popular modern restaurant design features in new senior living dining spaces is the open or exhibition kitchen.

“It’s such an appealing feature for residents to see their food being made,” Ernst said. “It elevates the experience.” 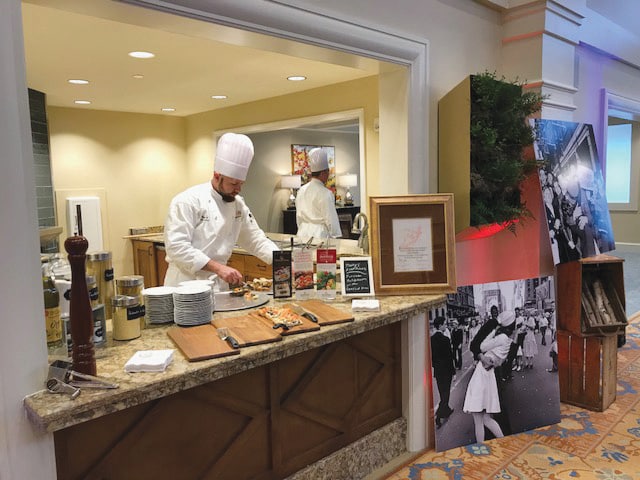 Dopson said the rise of open kitchens stems from a focus on transparency in food preparation and diners’ devotion to fresh, local ingredients and made-to-order cooking. Dopson also said the open kitchen creates a more “home-like environment” for diners.

“People want to get more engaged with food,” Dopson said. “They want to know where it’s coming from.”

Plumadore said Erickson Living has implemented many open kitchens in its venues.

The Food Network and the popularity of cooking shows, particularly those that put the chef in the spotlight, are an integral part of the boomers’ keen interest in the making of their food. Also, in that vein, some senior living communities are implementing demonstration kitchens that can host cooking classes for residents.

Even as senior living communities strive to create more casual, restaurant-like atmospheres, they also must take care to accommodate the unique needs and preferences of the population they serve. That means paying attention to the details in new designs—simply replicating a contemporary casual eatery can create an unpleasant climate for some seniors.

“Design for senior ergonomics is a key consideration in all aspects of senior living,” Bremhorst said.

For instance, Bremhorst said bar tops must be lower than at a typical bar so that seniors can sit rather than “perch” at the bar. Bremhorst also notes that the spacing and layout of furniture must make moving around a space comfortable for seniors, including those who need the support of mobility devices.

One of the advantages of the move toward smaller venues is improved acoustics for older diners, Mohlenkamp said.

“There’s an acoustical benefit to breaking down some of those larger spaces, especially when we can use some sort of banquette or furniture components or vertical wall components,” Mohlenkamp said. “When you start to create spaces within a larger space, sound doesn’t travel as much as it does in a wide-open dining space. From a comfort standpoint, that’s beneficial for an older adult.”

Dopson said even kitchen equipment must be considered when designing a dining space, particularly with an open kitchen setup. For instance, loud equipment that might get absorbed into the noisy environments common to busy restaurants “won’t translate to senior living,” Dopson said, where more diners might have hearing issues and could struggle to carry on a conversation if the kitchen is too loud.

“That’s why it’s very important to partner with the right kitchen food service specialist to get those components correct,” he said.

Continue reading the article "11 Trends in Dining Design for the Next Generation"...
READ MORE