Annual list points to continued expansion by senior living companies of all sizes.

The senior living industry has continued to evolve and expand since Senior Living Executive began publishing the annual largest providers list two decades ago. In that time, companies have been bought and sold, consolidated, reorganized, rebranded, expanded, contracted, and folded altogether. This year’s largest provider, Brookdale, became, by far, the largest player in the industry when it merged with Emeritus in 2014. Today, Brookdale reports nearly 100,000 senior living units in its buildings, more than double the units of its nearest competitor, Holiday Retirement, which largely serves independent living residents.

Occupancy has remained fairly stable for senior living, now a mature industry, for some time. The occupancy rate for senior housing for the nation’s largest 31 metropolitan areas was 88.8 percent in the second quarter of 2017, down 50 basis points* from the first quarter, according to the National Investment Center for Seniors Housing & Care (NIC) MAP Data Service. “This placed occupancy 190 basis points above its cyclical low of 86.9 percent during the first quarter of 2010 and 140 basis points below its most recent high of 90.2 percent in the fourth quarter of 2014,” explains Beth Burnham Mace, chief economist at NIC.

The quarterly decrease in occupancy correlates with providers’ aggressive pursuit of new building projects, so “inventory outpaced a change in net absorption,” Mace says. “The increase in inventory was the most in a single quarter since NIC began reporting the data in 2006. It’s notable that inventory growth has been ramping up for a much longer period for assisted living than for independent living, and as of the second quarter, annual inventory growth for assisted living reached its highest level since 2006—5.9 percent.” While demand was strong, it wasn’t quite “strong enough” to increase occupancy levels, according to Mace. Still, at 4.3 percent, the annualized pace of absorption was the highest rate since NIC began reporting the data, she says.

One thing is certain, with 10,000 baby boomers turning 65 every day, according to the U.S. Census Bureau, the need for long-term care isn’t going away. “The sheer numbers of seniors and their individualized desires are expanding at very well publicized rates,” says Discovery Senior Living (No. 16) chief executive officer Richard Hutchinson, adding that “the general marketplace acceptability of our industry and the understanding of the options it provides to live well is growing exponentially.” 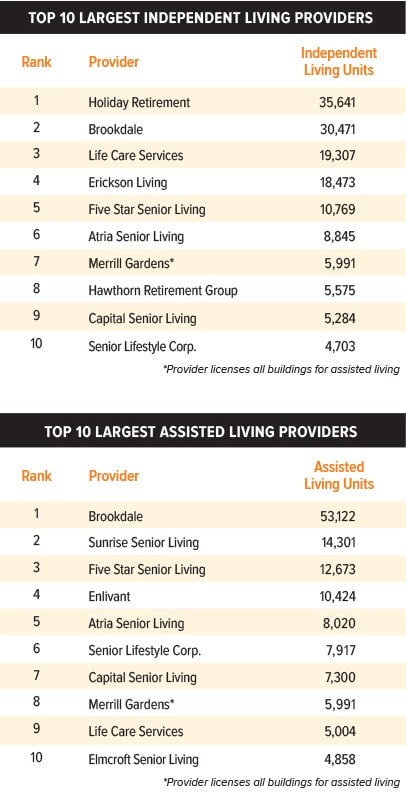 While exact comparisons to 2016 aren’t feasible due to changes in ranking criteria, the top 10 largest providers remain unchanged with the exception of Five Star Senior Living moving to the No. 3 spot and Enlivant eclipsing Affinity Living for No. 10. Five Star reported 14 acquisitions and expansions in the 12 months prior to March 31, while Enlivant grew by 3,000 units.

“Our business model has evolved in a few different ways,” says Five Star vice president of sales and marketing Rob Poyas, discussing how the company’s approach to growth has changed over the past five years. “We have reduced our reliance on government reimbursement and focused on the private pay market. Our primary focus will always be the quality of clinical services. Next is our continued evolution to a hospitality-based company,” he continues. “This will be crucial over the next 10 years as our residents’ expectations change dramatically. It’s all about building a customer service culture within the company.”

Growth is a common theme among senior living providers surveyed for the 2017 list. Integral Senior Living (No. 22), founded just 17 years ago, opened 11 properties in the past year and a half and has five more planned for 2017. “We have had a number of new developments open in the past 12 months with not only tremendous pre-leasing activity, but also fill rates,” says Integral chief executive officer and chief operating officer Collette Valentine-Gray. “The key is finding markets that are not saturated and specific pockets that have demand, yet unmet supply. We have a slick heat map tool we have developed that allows us to look at particular sites and gauge supply and demand within a specific radius.”

Erickson Living (No. 6) is investing $1 billion for 4,000 additional units this year. Pacifica Senior Living (No. 15) acquired 12 buildings totaling 1,100-plus units in the past year. American House Senior Living Communities (No. 19) has five residences under development or construction. Senior Resource Group (No. 20, up from No. 26 in 2016) acquired 14 communities late last year and has more in the works. Spectrum Retirement Communities (No. 26, up from No. 34 in 2016) has 13 properties under construction that will add another 2,000-plus units. Pathway to Living (No. 38, up from No. 56 in 2016) will open four residences this year. Within the past 12 months, Koelsch Communities (No. 56) has had six properties under development. Ridgeline Management Company (No. 68) recently acquired two communities in Utah, expanded a campus in Texas, is building a new community in Oregon, acquired a hotel conversion in Arizona, and has several other projects in the works. The list of companies experiencing significant growth is substantial.

Discovery Senior Living (No. 16, up from No. 22 in the 2016 list) has “grown at an average pace in excess of 30 percent annually over the past three years,” says Hutchinson. The company will add another 1,500 units before year’s end. “Even with the growth, we have turned down far more opportunities than we have invested in over that same period, focusing more on the quality of the opportunity and the fit of the opportunity into our organization rather than the sheer numbers the opportunities may present. We are very conscious of the stress growth can place on an organization and we are very thoughtful about the types and locations of the communities we add to the portfolio so that we don’t ‘get out over our skis.’”

Similarly, Stellar Senior Living (No. 95), with 1,050 units, also takes a somewhat cautious approach, carefully adding properties where it has made most sense for the family-owned company. “We’re opportunistic in growth. In 2012-2015 we acquired existing communities,” says Stellar senior vice president Adam Benton. “For the last few years, we’ve been focused on construction with additions, remodels, and new builds. Our goal going forward is to maintain steady, stable growth over the next 30 years.”

Perhaps one of the most obvious indicators of the continued expansion of the senior living business is found among the smallest providers in the 2017 largest providers list. The company in the No. 100 spot this year, Schonberg Care, shows 973 units. Last year’s No. 100, SAL Management Group, reported a resident capacity of 434. SAL has now grown from 10 to 15 communities and 693 units and sits at No. 110, thanks to the addition of a number of providers to this year’s list, including Maplewood (No. 97), Symerica (No. 107), IntegraCare (No. 108), and others. The smallest provider, at No. 115, is New Forum with 426 units and three communities.

The continuing care retirement community (CCRC) concept has re-emerged this year. Senior Living Executive tracked CCRCs for the first time in the 2017 survey. Sixteen of the 115 largest providers operate CCRC communities, including Erickson Living, which reported more than 20,000 CCRC units; Life Care Services and Brookdale, which each reported more than 19,000; and Five Star, which reported more than 9,000 CCRC units. For residents, continuing care retirement communities can be an attractive option. Seniors can be assured care, regardless of their needs, including skilled nursing care.

At Five Star, CCRCs are “true rental communities,” says Poyas. “They are important to us because true service lines—independent living, assisted living, memory care, and skilled nursing—aren’t always clearly defined. Our CCRC residents can continue to live on one campus with familiar staff and friends. CCRCs also allow couples and friends to stay together even if they need different levels of care. As a provider, we are able to offer a wider range of services and care options in our CCRC communities, which helps attract residents who will stay with us longer.” 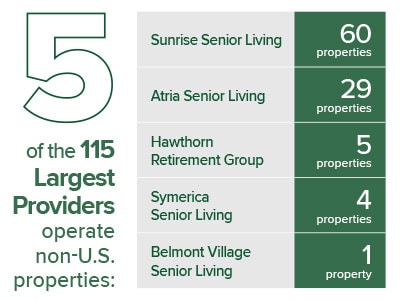 Another newly tracked data point in the 2017 list is providers’ participation in Medicaid waiver programs, which can provide much-needed financial assistance for low-income seniors seeking assisted living or memory care. About 40 percent of the largest 115 providers currently participate in state Medicaid waiver programs, with several states represented. Eligibility and coverage varies by state.

Senior living isn’t just a health care and hospitality business; it’s also an attractive investment. Senior living real estate investment trusts (REITs) report a combined investment value of $52 billion in more than 2,400 properties. While some providers continue to both own and operate their properties, an increasing number have sold the real estate to investment trusts. Consider that Ventas reported $8.6 billion in senior housing investment value in 2015 compared with $16 billion today, and Senior Housing Properties Trust reported $3.3 billion in 2015 versus $4.5 billion today.

Private equity firms have also plowed funds into properties with the anticipation of solid returns. For example, Capitol Seniors Housing has $1 billion in equity in 24 senior living properties. Others, including Carlyle Group (HCR Manorcare), Blackstone (Senior Lifestyles), and TPG (Enlivant), for example, have equity in any number of properties in the largest providers list.

It seems clear, as private equity funds and REIT investments continue to pour into the business, senior living properties will continue to change hands, fueling both acquisitions and new developments.

Despite optimism about senior living overall, providers acknowledge that coming years will bring their own set of challenges. The percentage of the population that is aged 65 and over is expected to grow from 15 percent to 24 percent by 2060, according to the U.S. Census Bureau. Not only will this demographic shift impact the number of seniors needing care, but it points to a shrinking market for employees. Finding qualified staff will continue to be an issue as senior living providers represent a significant employer base, with some providers reporting nearly a one-to-one employee to resident ratio.

“I am concerned; however, I’m confident we will stay ahead of the recruiting and retention curve by empowering our team members and giving them the tools they need to be successful,” says Senior Lifestyle chief executive officer Jon DeLuca. “We, at Senior Lifestyle and as a broader industry, are building relationships across the country at schools and institutions to effectively educate students on the seniors housing industry and the exciting opportunities within the industry. We should always be recruiting, as we never know where we will meet great talent.”

Changing resident needs will keep providers nimble as well. In Hawaii, for example, resident preferences are quite specific. “Team members are encouraged to recognize these special customs and to offer special foods, cultural activities, and celebrate traditions that are all important in Hawaii,” notes Tricia Medeiros, chief operating officer for Sound Health Hawaii. “Activity programming includes events such as hosting a Bon dance, playing Hanafuda, and mahjong, tai chi classes, and offering hula and ukelele lessons. We also include food items on our menus that capture the various Filipino, Japanese, Chinese, and other local cuisines.”

Other providers point to requests for à la carte services, more urban settings, holistic wellness, and other changes in resident desires. In the end, though, “It’s still people caring for people,” concludes Benton. “The innovation in operations has improved and you see that through better systems and hospitality centered service. Overall, there’s a bright future for senior housing.” 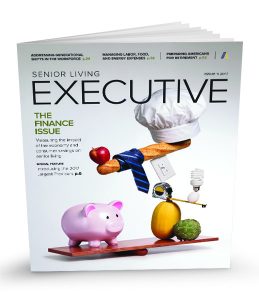 The Finance Issue: Measuring the impact of the economy and consumer savings on senior living

In this issue of Senior Living Executive, we review best practices for balancing and managing the chief drivers of cost in senior living—labor, food, and energy—as well as research on Americans’ financial preparedness for retirement and health care costs. This issue also introduces our annual Largest Providers list representing 115 providers and nearly 550,000 units across the country. We are proud to note that of the largest 115 providers, nearly two-thirds are members of Argentum.  VIEW THE DIGITAL ISSUE