As a brutal cold snap battered the East Coast in December 2017, Jon Tagatz was reminded of another especially cold season four years ago, when he saw his community get swamped, literally.

As executive director of The Heritage at Brentwood in Brentwood, Tenn., an LCS community, he had the helm when freezing temperatures burst 30 sprinkler lines at the top of a three-story building. “All of a sudden when things thawed out, we had gallons and gallons of water rushing down,” he said.

Tagatz’s team scrambled to move residents into vacant units, to relocate people to nearby hotels, and to get contractors on site to begin repair work. The key to getting through this $1.7 million disaster smoothly? Planning.

“Because we had a plan in place, we were able to get the water mitigation people in there right away. The contractor was on site the same day, because we had already established that relationship and we had that expectation in place,” Tagatz said.

Disaster planning has always been a part of senior living: Responsible providers understand intuitively the need to prepare for worst-case and what-if scenarios. Lately, though, there has been an increased intensity surrounding the need for such plans, as the frequency and severity of natural disasters continues to rise.

With three major hurricanes, assorted wildfires, drought, flooding, and freezes, 2017 was the most expensive year on record for natural disasters, according to the National Oceanic and Atmospheric Administration. Sixteen major events rang up $306 billion in damage.

At the same time, senior living has been upping its game, bringing a new level of professionalism to the complex craft of emergency planning. “It has evolved into more of a written plan. Twelve or 13 years ago we were doing this in a thoughtful manner, but it was done by just a few people who handled everything,” said Michael Gentry, senior vice president of care & life guidance at Atria Senior Living. “Now it’s more formal, we have teams handling different aspects of the plan. We have a command center. It’s much more scientific.”

On the surface, emergency planning is a straightforward affair. Assess potential risks. Make plans and train frequently. Establish relationships that you can activate in a time of crisis. Those are the basics. In practice, there’s a lot more to it.

A fire isn’t a flood isn’t a tornado. An elopement requires a different response for an active shooter. While it’s important to have a specific plan for any given emergency, that doesn’t necessarily mean executive directors must carry in their heads the detailed specs on a half-dozen different response scenarios.

Rather, emergency response experts encourage what’s known as an “all-hazards” approach, with plans that are rich in specific detail but general enough to be put into play regardless of the emergency at hand. “The probability that a specific hazard will impact your business is hard to determine. That’s why it’s important to consider many different threats and hazards and the likelihood they will occur,” according to the U.S. Department of Homeland Security.

In this model, planners identify potential risks, assess vulnerabilities, and consider the potential impact of a given scenario. The idea is to focus attention on those potential disasters that are most likely to occur and where the impact would be most significant, and to build the bulk of your disaster plan around those high-risk events.

The outcome of this risk assessment will vary by community based on a range of factors. Are you in a flood plain or a tornado zone? Are your residents independent or higher acuity? What local resources can you count on—government agencies, tertiary care facilities—in the event of emergency? This is the first lesson in the emergency planning playbook: No two emergency plans will ever be exactly the same.

What are the implications for senior living? It means that regardless of the size of the company, plans must be created locally, or at least be significantly tailored at the community level.

Take for instance Northbridge Companies. With 16 communities in the portfolio, “we have a template that is very, very basic,” said Shawn Bertram, vice president of operations. “We have a framework that we give to all our executive directors as well as our maintenance directors, and it is then tailored to every property. The fire panel may not always be located in the front vestibule. It may be located in the back receiving area in one building. Or the water shutoffs may not be in the same location. We want to leave those details up to the site so that they can communicate that to their teams and ensure everyone is on the same page.”

With 200 locations nationwide, Atria takes a similar approach. The corporate office offers a template which is then fine-tuned at the community level based on the level of risk, the resources available, and a host of other community-specific factors.

Those localized checklists become the driving force behind Atria’s emergency response, as Figueroa saw when she helped the company’s Houston communities prepare for the arrival of Hurricane Harvey. “I went to every community and went through the checklist of flashlights and name tags, making sure we were covered for every single resident,” she said.

At Northbridge, having localized plans makes it possible to meet the diverse requirements that can vary not just at the state level but even at the city level.

“Fire chiefs want things done in a certain way. It’s their people who are going into the building and they will want us to meet their requirements,” Bertram said. “We have five communities in Maine and each fire department has its own way of doing things. Some will allow us to evacuate to a courtyard, while for others we have to fully evacuate away from the building. In Massachusetts, some communities will allow us to protect people in place, where others want us to bring people together in a common room or a common area.” 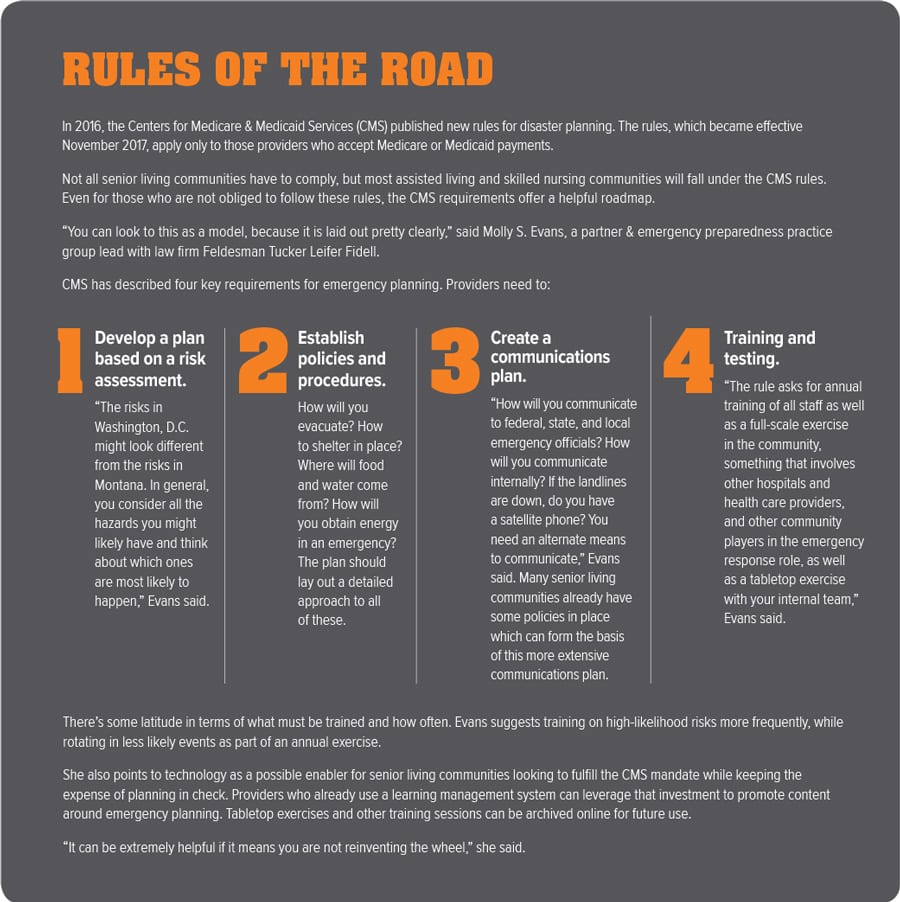 The need for granularity applies not just to individual communities, but also to specific types of emergencies. A tornado, a flood, an active shooter, an elopement: Each requires a degree of finesse in terms of planning. In some cases, evacuation may take a higher priority, while in others the immediate concern for safety takes precedence.

This seems to set a high bar. Do executive directors need to master the fine points of multiple distinct emergency plans in order to be truly prepared? Experts say no.

“You want to think about it as an 80-20 rule,” said Umair A. Shah, president of the National Association of County and City Health Officials (NACCHO) and executive director of Harris County Public Health in Texas. “There are 80 percent of things that are common to all emergencies. Then you look at the 20 percent that would happen if there was a flood or if a tornado took the roof off. You start with the 80 percent and then work on the 20 percent.”

Even that 20 percent need not be exhaustive. It comes back to the risk assessment: In fine-tuning the general plan, consider which specific risks rate highest for your particular community, and focus your energies there.

With that tailored, localized plan in place, it’s time to implement the second lesson in the emergency planning playbook…

Read the full article to learn about training your team, creating new partnerships, and implementing the plan...
READ THE FULL ARTICLE