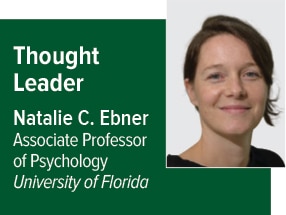 News stories are coming up more and more often about older adults falling victim to financial scams, sometimes losing even hundreds of thousands to mythical promises on the other end on an email. What’s more, loved ones say, these are often people who earlier in life were cautious, careful, and nobody’s fool.

Is the problem age? Can the scammers somehow target more likely victims? Is there something about the way these emails are written that makes them irresistible?

It’s a little of all of these, say researchers including Natalie Ebner, associate professor in psychology at the University of Florida. She’s one of several who have been looking into the phenomenon of elder financial fraud, trying to determine how it works, so they might find a way to prevent it.

“In my lab, we were really interested in decision-making—how decision-making changes with age and what could optimize or hinder decision-making. In that context, we got interested in studying aging and decision-making in the cyber space. Using the internet, there are a lot of new situations individuals are confronted with—they have to make decisions on the spot and often without a lot of information or even much knowledge of the media that they are using.”

They set up a benign “phishing” scheme, modeled after what scammers do to try to “hook” victims. (People had given permission to be in a study but had no idea what it would be.) Young and older adults got emails that, without their knowledge, had been written and sent by the project, but used scammer language. If a receiver clicked on the offer, nothing would happen, but the project would count it.

The results: Older women were more likely to fall for the fake phishing. “We followed it up a little bit more, and found that it’s not just all older individuals, but ones who are low in memory performance and low in their affective profile,” Ebner says.

Meaning if a person has some cognitive difficulties, and if that’s combined with feeling negative about their everyday lives, the result is more vulnerability to fraud.

While that gives a clue to who may be in danger, Ebner was also interested in another finding: Almost half of the email recipients, whatever their age or gender, fell for it at least once. “This really showcases how much of a risk this is in all the population,” she says.

Another finding, also related to age, was the low susceptibility awareness. If people know they may be more at risk, perhaps they could better guard themselves, she says—but it didn’t work that way. Again, without any knowledge that they had been phished, subjects were asked, in effect: Would you know a scam if you saw it?

And the answers, particularly among older men, were effectively: “Sure. I’d see it a mile away.”

Except they hadn’t seen it. They had fallen for the benign, fake phishing emails—some many times.

They had a low susceptibility awareness—they weren’t aware of how much at risk they really were of being scammed. That confidence sets up another danger factor.

More research is ahead to find if cultural or generational factors make a difference in susceptibility, and the team and other collaborators are looking at the phenomenon in other countries; unfortunately, elder fraud is global. Another area for exploration is the role social isolation or loneliness may play in increased risk of fraud.

“It’s going to be very interesting to profile people and to understand who high-risk individuals are and who are low-risk individuals, so that we can develop supportive approaches more tailored toward different risk profiles,” Ebner says. “To find out what individuals need in terms of help and support to make the right decisions online.”

One project in the works is a fraud-detection app that measures language and other factors that could indicate phishing on one end, and susceptibilities of the older person receiving the communication, so the app could give a warning. Some could be based on pre-existing knowledge of risk factors and some on machine learning. The researchers have already dubbed the app “Merlin,” because, Ebner says, the mythical magician was “a wise counselor to the king.”

But that’s years away. Until then, Ebner advises, the best approach might be to slow down, and ask someone. Realize this could be a risk, get some help making decisions, and above all, don’t feel rushed by a false sense of urgency or scarcity. Commands to “act now!” are still the weapon of choice for scammers.