Leaders Show the Way to A Strong, Motivated Workforce

These are stories of senior living community employees who took a look at the challenges in attracting and maintaining a high-quality workforce and decided to do something about it. There are many more like them in communities around the country. Some got where they are by opting into educational programs and benefits through provider companies, some are Argentum Senior Living Works Ambassadors, some had good mentors or encouragement, and some built their own programs from the ground up. All have some lessons learned to share. But the big takeaway: no one position or level has a monopoly on great ideas—or on taking action. 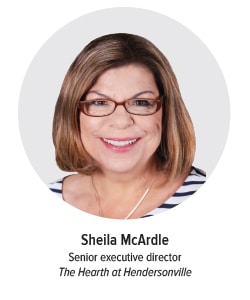 Sheila McArdle is the creator of a groundbreaking program. The senior executive director at the Hearth at Hendersonville, in Hendersonville, Tenn., she is continuously looking for ways to improve quality and efficiency.

Having more associates qualified to administer medications could help with both. In previous positions, she had seen that states used certified medication aides. Could this work for Tennessee?

The answer was yes, but: The Medication Aide Certified (MAC) position existed, but there was no one doing training at that time. While training had previously been allowed only at educational institutions, Tennessee had recently opened the door to allowing training at certified sites.

McArdle set out to make Hendersonville one of those certified sites. The community would offer the MAC credential training to interested CNAs as a way to benefit residents and help employees move up at the same time.

“It turned out to be extremely complicated and complex,” she says. “We had no manual, no textbook—all we had were the regulations we needed to meet.”

Everything had to be created from scratch, without even a recipe. For instance, not only did she have to create a curriculum, but it had to be approved. Determining eligibility, how long classes would be, creating quizzes and tests, creating an instructor’s manual—that took several months. “I got a lot of help from the state board of nursing,” she says. “They surveyed the curriculum, and we were invited to present it to the state board, and we were the first assisted living community in the state to be approved to teach this class.”

The hard part wasn’t over. The Hearth team put a textbook together themselves and ordered a published textbook as a supplement. They paid associates for the time they spent in class. Each student had to be a CNA in good standing who had worked full-time for at least a year in long-term care or senior living setting.

About two weeks into the class, she says, a few students came to her concerned they wouldn’t make it and wanting to quit. These were working adults who had been out of school for a long time. They had work and families and all the other concerns many other students don’t face.

McArdle kept them going by reminding them of how many skills they had learned over the years, and how many they used each day. “You know more than you think you do,” she told them.

All graduated. The Hearth at Hendersonville held a formal graduation ceremony and presented the grads a gift: a stethoscope.

“Two of them have come to me and said, ‘I’m going to do this for a year, and then go to nursing school,’” McArdle said. “It’s great for our retention and to promote senior living as a career.”

Shaping your own destiny

Ahkira McPherson, RN, staff development coordinator at Vi at Lakeside Village, is a fast learner—and she takes every opportunity to learn more.

She believes in education as a key to retention—and it worked for her. McPherson started at the Lantana, Fla., community as a server, in 2001. From there, she became a CNA, then an LPN, then an RN, until her present position, managing resident care staff development. She recently was part of a team making a presentation on hiring and retention at a national industry conference.

“We want to see every employee develop here,” she says of Vi’s culture. That culture has allowed not only educational opportunity, but a chance to shape her role to be responsive to the need to work in multidisciplinary teams.

She has made her position “multidimensional,” as a Vi company newsletter puts it: helping employees shape their own careers, onboarding new hires, and measuring and meeting quality measures. But she also works actively in the health care side. For instance, she consults with nursing and rehab on wound care since earning her Wound Care Certification (WCC), also with tuition support from Vi.

And her own story makes it clear to newcomers that a way up the ladder is achievable. McPherson advocates for employees to go for appropriate educational opportunities to make the climb. Vi’s culture of support for learning, she says, is a major reason that she has stayed with the company. Employees throughout the company can take courses through ECampus, Vi’s online university. But specialized courses are available for those who apply and meet the qualifications.

McPherson applied to and was selected to take Vi’s one-year Management Development Institute, a program that fills a critical gap by preparing employees to pursue future leadership programs. Next, she was admitted to and completed the seven-month Emerging Leaders program for mid-level managers; in 2020, she plans to complete the one-year Breakthrough Leadership program for high-potential leaders. This last program includes classes taught by Vi executives, DePaul University faculty, and a six-month virtual program through Harvard Business Publishing.

While nurses often have multiple administration skills, management training makes the difference in moving from a primarily health care role to one where a manager also has to interact effectively with dining, housekeeping, environmental services, and more. “They would give us real-world content issues,” she says.

Through group discussions, the employees also learned from each other, she says. “You see things from a different perspective. You see why we do things the way we do.”

Offering experience as an entryway 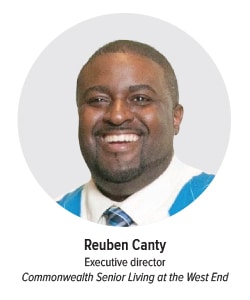 Reuben Canty, executive director at Commonwealth Senior Living at the West End, in Richmond, Va., got inspired when he went to this year’s Argentum Senior Living Executive Conference, in San Antonio. He had seen that it was a challenge to hire and retain “passionate, quality associates”—but at the conference, he learned that this was a problem all over. Some encouragement by Tommy Comer, Commonwealth’s chief human resource officer, to actively seek out talent outside the industry through networking and school visits, also helped.

Brainstorming led to the idea to partner with the Richmond-area Henrico County public school system, which has a strong Career and Technical Education program. “It has a great reputation,” Canty says.

Students in the practical nursing program need clinical experience—and that’s where West End came in. “We partnered with them and allowed them to use the community as a clinical site,” Canty says. “So the community has direct access to their new graduates, and we can provide employment once they become licensed.”

The students have several options for their clinical experience, so Canty had to do some outreach and education. But it worked: “There’s a strong clinical rotation here,” he says.

Canty considers his career path a happy accident: He had a degree in applied health science and an LPN and was mulling going back to school with the goal of becoming a chief nursing officer, when his wife saw an ad for senior living employment. He moved up to administration within a few months. After several years’ experience at other providers, he has been at Commonwealth as executive director for four years.

Effective recruitment is part of leadership 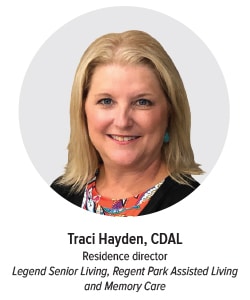 At the Executive Director Leadership Institute (EDLI) held at the Argentum Senior Living Executive Conference in 2018, Traci Hayden, CDAL, heard about the Senior Living Works Ambassador program and signed up.

“It became apparent to me how I could benefit from the offerings of the program,” she says. “I could network with others on initiatives.”

As residence director at Legend Senior Living’s Regent Park Assisted Living and Memory Care in Wichita, Kan., she considers recruitment of associates an essential part of her skill set. Recruitment is part of an ongoing effort, however. “Recruiting the right associates, who have the caregiving heart, is essential to success,” but “education and training is crucial to retention.”

Hayden has used the Ambassador tools (seniorliving.works) to cultivate relationships with local with local colleges, and she uses the customizable slide deck for presentations to students.

She has recruited from culinary and nursing programs; establishing Regent Park as a site for medication aide clinical experience has been particularly successful.

“The best way is face-to-face” 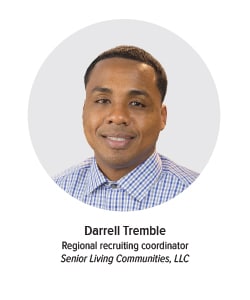 Tremble does so with a lot of enthusiasm, a lot of travel, and a bit of schwag—a t-shirt or small gift can do a lot in capturing middle schoolers’ attention. He’s also a Senior Living Works Ambassador and uses tools from the program.

Middle school isn’t too young to consider career development, Tremble says. In fact, that age can be the most productive—if you’re patient. “In middle schools, we’re not looking for immediate results,” he says. The point is an introduction: Taking away stigma, showing the realities of communities, showing that there are lots of options for different kinds of jobs in senior living.

High schoolers more often have ideas about what they want, but a visit can still open eyes. Tremble often brings someone from recreation or human resources along to show that much more than health care training is required to run a community.

He ended up in senior living because he saw his brother’s dedication: Marcel Tremble is vice president of operations at Maxwell Group, which manages Senior Living Communities. Darrell Tremble had a Bachelor’s degree in finance and an MBA and had been in human resources at the Family Dollar corporate office.

Turnover is a comparable or even worse problem in retail, he says. He feels senior living has a little more sticking power in terms of retention because of the close connections forged. When students ask employees how this became their passion, many speak of having cared for relatives—and some students can relate, because they’re doing the same.

One of his interns from the 2017 project is now going to Tremble’s alma mater, Wingate University. “I’ll probably see him at homecoming,” Tremble says.