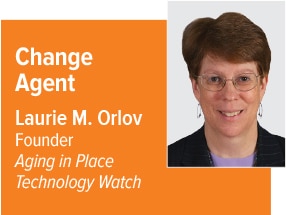 Laurie M. Orlov heard it coming—voice and other smart tech was going to change aging. The founder of Aging in Place Technology Watch shares wisdom earned in years as a technology industry analyst consulted by large organizations and entrepreneurs, and by the Wall Street Journal and Business Week. More of her takes on what’s ahead are available in her reports and frankly outspoken blog (ageinplacetech.com). Here, she shares some analysis about technology and older adults, looks at ways new technology could change the senior living industry, and champions freedom of choice in technology adoption.

There’s sometimes an assumption that older people don’t want to use technology, that they find it difficult. Is that a false assumption?

Older people are people and they want to communicate. To the degree that they have devices that can help them communicate—as opposed to getting in their way—they would appreciate that.

The telephone, or text messages with grandchildren, have been great enablers in the lives of older people. Email has been a fabulous communication capability for older people. Many older people would also say Facebook—I would not say it, but many others might say Facebook was a big leap forward.

Technology is desired and appreciated by older people to the degree that it is easy to use, or that there’s someone to show them how to use it, or that they have the appropriate infrastructure in place to be able to use it.

The infrastructure can be a problem. What’s needed to make new communication tech easy to use in senior living communities?

I would say the number one basic prerequisite would be Wi-Fi availability, to each resident, in each unit. Sometimes some senior living communities implement Wi-Fi only in common areas.

I think every resident has a right to Wi-Fi access, and they have a right to bring the technology and devices they like. Over time, they will be doing so. Will they adopt the latest and greatest technology quickly? That’s less likely.

But people are moving in with their own stuff. They want to do video chats, use their phones, voice tech. They should be able to bring their own devices and have choices.

So if you like your phone, you can keep your phone. Clamshell phones are still around—24 million of them were sold in 2015 in the United States. Increasingly, people are buying smartphones but putting them to their most straighforward uses, which could be texting and having phone calls.

Older adults in the upper age ranges may not be as enthusiastic about the latest and greatest in technology, as younger people may be. And partly that’s because the technology isn’t so easy to use.

I believe lots of folks are trying to get the attention of the big tech players, so they put more focus on this.

In addition to infrastructure, you mentioned having someone to help as a factor in tech adoption. Do you see more tech help becoming available for older adults?

Lots of people are stepping into the gap—AARP is offering workshops in the use of various technologies, around the country.

Another example is a program that started in New York City, called Older Adults Technology Services, OATS, which has spread to several locations and is holding what they call Senior Planet sessions, which teach how to use smartphones and apps. Many senior centers have volunteers who come in and help older adults learn about new technologies.

And the last and probably the best way to learn about a new technology is: Take a training class or be trained by someone in the store where you bought the device. If you don’t get it the first time, you have every right to go back. Go back a second, and third, and fourth time if necessary.