How does an owner of a senior living company, who’s a fan of the University of Tennessee’s Lady Vols basketball team and admirer of their coach, Pat Summitt, work to support the fight against Alzheimer’s? Joshua Crisp, founder, president, and CEO of Solinity, based in Knoxville, Tenn., didn’t have to search long to find his answer.

“I know the huge impact that Alzheimer’s and dementia has on our society and I see that firsthand in our residents,” Crisp says. But to honor Summitt, who died from the disease in 2016 and was the all-time winningest coach in NCAA history, he knew he wanted to raise money requiring a team effort that would also tie symbolically into her 1,098 career wins.

Although willing to push himself far beyond his comfort zone, Crisp knew he couldn’t run that many miles. But then he landed on the idea of a bike ride. “I wanted every mile we rode to honor each one of her victories,” he says. Along with his co-chair Michelle Brooke-Marciniak, a University of Tennessee Lady Vol basketball Hall of Famer, they formed an eight-person team for the newly created event, Pedal for Pat. The trip was to originate in Knoxville and travel 1,098 miles to the Florida Keys in just 12 days.

“As a fan, I’ve followed Pat’s story and know what kind of leader she was, both off and on the court. Her focus was always on others and those things bigger than herself,” Crisp says.

Diagnosed in 2011 with early-onset dementia at age 59, Summitt survived for five years. But one of the first things she did following her diagnosis was form The Pat Summitt Foundation to bring awareness to and help find a cure for Alzheimer’s, even though she knew that she herself would not get the chance to benefit, says Crisp.

Fighting Alzheimer’s one mile at a time

One of the bigger challenges for Crisp was that he wasn’t actually a bike rider. In fact, when the idea was being formed, he didn’t even own a bike. But a fast training schedule and enthusiasm got him ready to be part of the team who would ride around 100 miles a day. Starting from the University of Tennessee campus, they were on the bikes between six and eight hours daily. “It doesn’t give your body much time to recover between rides,” says Crisp, who ended up losing a pound a day. “It’s also hard to consume and replace all the calories you’re burning.”

It wasn’t always easy to get back on the bike every morning either, Crisp says. “It’s a demanding physical experience, but there’s also the mental part when your body tells you that you can’t go on. But that’s when your team comes in. Everyone hit a low point at different times of the ride but there was always someone there to support them. Someone telling you that you can do this,” he says.

Another challenge toward the end of the ride occurred as they were approaching the Florida Keys at the same time as a tropical storm. “It became apparent that the only way we’d be able to finish was if we doubled up on the miles the last few days, so we actually finished in 11 days,” says Crisp.

Featured on ESPN, in Sports Illustrated and USA Today, the team raised over $150,000. The money will be donated to The Pat Summitt Foundation, which awards grants to the best nonprofit organizations that are engaged in Alzheimer’s care, support, and research, according to the Foundation’s executive director, Patrick Wade.

In January 2017, The Pat Summitt Clinic also opened in Knoxville, created through a partnership between the Foundation and the University of Tennessee Medical Center, Wade says. “It’s a multidisciplinary clinic that delivers patient care, resources, and support for caregivers, as well as conducts Alzheimer’s disease clinical research.”

Looking ahead and getting involved

Crisp says when they started he had no idea of the logistics it took to handle an event of this scope and size. Now, he and Brooke-Marciniak have set up a nonprofit organization, Pedal for Alzheimer’s. Its purpose will be to create and host events like Pedal for Pat, helping to raise money for groups researching, treating, and educating about dementias. 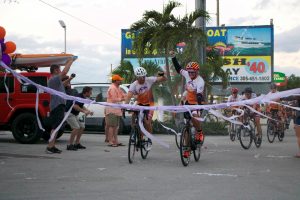 They’ll also be adding shorter rides for people who can’t take off or ride for 11 days, says Crisp. This year, they’re planning for a couple of day trips where people can ride with them, including on the first day starting from Knoxville, and again on day six or seven in the city they’ll then be in.

Crisp says they’ve also been contacted by senior living companies that want to host or sponsor a one-day event in their town. It’s something the nonprofit is interested in doing and will possibly start offering in 2019.

“I can’t wait for the ride this year,” Crisp says. “We’ll be announcing the location and details of our 2018 ride soon.” The check raised from the inaugural ride will be presented to The Pat Summitt Foundation at a Lady Vols basketball game on Feb. 1, 2018.

“This event grew bigger than I ever imagined or dreamed,” Crisp says. “I’ve been so blessed and now have so many relationships that I wouldn’t have if I hadn’t been a part of this. It was the most physical, emotional, and mentally exhausting thing I’ve ever done. But also the most rewarding.”