Serving the Dietary and Nutritional Needs of Older Adults

A nutritious, flavorful diet is fundamental to health and quality of life for senior living residents. However, older adults may face physical and cognitive challenges that make it difficult for them to gain adequate nutrition and satisfaction from their meals. How can providers meet these challenges to ensure optimum nutrition among a resident population with a wide spectrum of needs?

This is the principle used at Unidine, which provides food and dining management services to more than 160 senior living communities across the country. “Our foundation is our Fresh Food Pledge, which is fundamental in what we do,” said Tim Bouchard, senior vice president of operations at Unidine. “We don’t buy premade lasagna or premade meatballs. We make all of those types of things in-house.” Seasonal menus can be planned around produce available locally, such as ripe strawberries in the spring or tomatoes later in the summer.

Likewise, everything is cooked from scratch at Sunrise Senior Living. “That’s really the biggest and best way to improve nutrition and to prepare things that are very flavorful—much more flavorful than you would get if you were opening up a can of something,” said Caitlin Rogers, vice president of dining and senior nutrition at Sunrise.

Rogers said that her team develops menus and recipes for nearly 30,000 residents in almost 300 communities. The menus are centrally planned at the corporate level, but communities can choose from nearly 30 different variations. Examples include a seafood-rich Coastal menu and a meat-and-potatoes comfort food menu called Heartland. Each community can further customize its menus with chef specials. 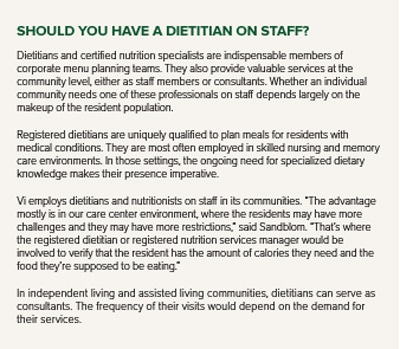 Resident satisfaction is just as important as the nutritive attributes of the food itself. If residents don’t like the meals, they’ll eat less and could face a decline in their health as a result.

A major key to resident satisfaction is offering a variety of menu items and options. “Any menu, no matter what it is, can quickly become stale if the dietary staff doesn’t have a constant focus on variety, color, and plate presentation,” said Cathy Mosley, manager for senior living at US Foods, which serves more than 10,000 health care customers nationwide. “Residents want choices, they want flexibility, and they want to have input about their menu.”

At Vi, chefs at each community create the menus, which are then approved by the corporate office. “We look to make sure that first of all the quality is there, that they’re using seasonal ingredients, and that there are enough choices, so it’s not repetitive,” said Steve Sandblom, corporate director of food and beverage. “At the very minimum we have a six-week menu cycle, but most of our communities are reinventing the menu every single month.”

Resident dining councils are a valuable tool for gathering feedback about a community’s menu. They provide an opportunity for residents to indicate the menu items they enjoy or dislike as well as requesting items they’d like to try. Residents can also ask to have their own recipes featured for a special occasion, for example.

Another key to resident satisfaction is the dining environment. “Part of providing care for people living in senior care is making sure that we respect residents’ food preferences, including the time of their meals and the environment of their meals,” said Sonal Patel, consultant dietitian/nutritionist and president of HealthyBite LLC. Her company provides medical nutrition therapy to residents in health care settings including senior living. Residents should be encouraged to eat in a communal setting, but if they insist on eating alone, staff should respect their wishes. If residents are unable to articulate their preferences, staff should speak with family members to find out what the resident likes to eat, how, and when.

For seniors with health challenges, the goal is to allow as liberal a diet as possible so they can enjoy the same food as everyone else. Less restrictive diets tend to result in greater intake, which gives the resident more vitality and satisfaction and therefore promotes a greater quality of life.

When modifications must be made, they should be done in small increments. “The new thinking in long-term care is that we need to be the least restrictive when it comes to food,” said Patel. “Most [older adults] do not consume enough food to begin with, for several reasons.” Intake can be affected by factors including diseases, mobility issues, cognitive issues, dislike of the food, and some medications that suppress appetite. “I would say probably at least 50 percent of residents don’t eat enough,” Patel added. Restricting their diets further could lead to malnourishment.

Rogers said that at Sunrise, residents of skilled nursing have their diets closely monitored, while those residing in assisted living are given more liberal options. “In our assisted living environment, the residents are free to do as they wish. It’s their home, they should choose what they want to eat and we’re here to provide them with the choices to do that.”

At Vi, the culinary staff works in close coordination with the lifestyles department to plan menus. Eating well is a main component of the company’s Living Well program, but “eating well” does not necessarily mean being on a strict diet. “Eating well might mean having a cheeseburger today because you’ve been eating salads all week,” said Sandblom. The inclusion of occasional treats and indulgences in a resident’s diet helps to maintain the enthusiasm and enjoyment of food that is so important to overall well-being.

Unidine’s menus are supplemented with spreadsheets detailing modifications for special diets such as puréed, calorie control, or carb control. Even so, the renal, carb control, and sodium control diets are not strict. “We generally like to liberalize the diets as much as possible,” said Bouchard.

When it comes to evaluating a resident’s food intake and planning a healthy diet, Patel trains her dietitians to look at many factors that affect nutrition. Those include the medications a resident is taking, what their usual diet is like, whether they are eating enough food overall, how much they weigh, and the results of any lab work. “We do take care of everybody on an individual basis,” she said. “That’s very important. There are no generalizations. Everybody is an individual and everybody needs to be treated as such.” Dietitians will further consult with nursing staff and medical providers to create meal plans for residents with significant health challenges. Some of the more common special diets in senior living and their modifications include:

“The population is changing,” said Bouchard. “We’re getting a more sophisticated group that’s focused on health and wellness.” He added that residents are requesting more healthful options, including vegetarian entrees such as Unidine’s popular homemade veggie burger and a chocolate cake made with beets.

Technology is also enhancing senior living dining. The software application eMenuCHOICE presents diners with photographs of more than 600 menu items along with written and audio descriptions, which can be recorded in any language. “What we like to say is that if you have a lot of options but the residents really don’t know what they are, then it’s not really true choice,” said Matt Stenerson, eMenuCHOICE cofounder and CTO.

The program also stores individual dietary guidelines, allergy, and health information for each resident, and integrates with electronic health records for real-time updating. It further identifies each diner by billing category and generates an appropriate monthly bill. The customizable program runs on any platform and can use a community’s existing tablets, PCs, and Macs.

Senior nutrition is a complex process that requires the involvement of everyone in the community, from culinary staff and dietitians to aides, nurses, residents, and family members.

“Food service isn’t an island by itself,” Bouchard said. “We have to work with everybody within the [community] to meet the needs of the residents.”