Spice Blends Are On Trend for Healthy Variety

Herbs and spices are a powerhouse addition to senior living dining. They add a personal touch, the excitement of new flavor, and hearken to cultures and travels. Beyond that, they’re the new health boosters: A great way to reduce sodium, have anti-inflammatory properties, and are a prime component of the MIND Diet.

The MIND Diet is a hybrid of two eating plans proved to improve health: the Mediterranean diet and the low-sodium DASH diet. It was created and continues to be studied by researchers at Rush University Medical Center in Chicago, which has found the diet is associated with dementia prevention (and is also heart-healthy). It is less a diet than an effort to increase certain foods and decrease others, which has also won it kudos as one of the easiest diets to follow and stick to. 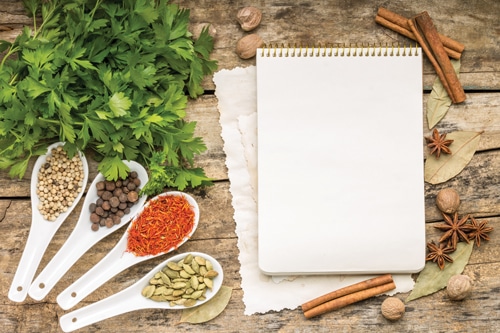 The evidence-based, plant-forward MIND diet, full of vegetables, berries, healthy oils, nuts and legumes, whole grains, fish and poultry—and a moderate amount of wine—is specifically created to improve cognitive health. But the dishes created with these ingredients often use flavorful blends of herbs and spices that are healthy in themselves, too.

Morrison Living has embraced the diet with its “Globowls.” It’s a system by which several distinct flavor profiles can be used in a variety of ways by food services: As a bowl, with a grain, protein, vegetables, and toppings; as an action station for custom prep, by chefs preparing a single flavor profile that’s a community or regional favorite; or on a menu where residents can create their choice.

It was launched with four trending tastes: Peruvian, Moroccan, Indian, and Japanese. “It’s a great way to introduce new ingredients without compromising a menu item that residents love,” says Adam Grafton, vice president, culinary, at Morrison Living. “The braised chicken that everyone likes—we’re not removing that; we’re just adding it to a Japanese grain bowl with the hopes that that becomes a new choice.”

The flavor profiles happen to be packed with anti-inflammatory herbs and spices such as cilantro (fresh, or coriander, which is the dried seeds of the cilantro plant), cinnamon, cumin, garlic, cloves, cardamom, and turmeric—just used in different ways and proportions. Morrison provides recipes to make the spice blends in a community kitchen.

For starters, the MIND diet and the flavor profile system are a great way to get more vegetables and whole grains into daily eating, says Traci Miller, RDN, senior director of nutrition and wellness at Morrison. “People in senior living communities like to dine out and watch cooking shows as much as anyone else. They’re seeing all this amazing stuff and want to try it,” she says.

“It comes down to the antioxidant and anti-inflammatory properties,” Miller says. Reducing inflammation in partnership with reducing sodium helps reduce hypertension, which takes a toll on the aging brain, and reduce risk of stroke. Dementia and cognitive difficulties have been linked to inflammation.

The flavorful options are part of culinary’s support for Morrison’s Move Your Mind program, a turnkey health activity plan using the six pillars of cognitive health. For the food pillar, Morrison offers interactive teaching kitchens and presentations with an emphasis on fun as well as mind health.

For those making the shift to spices, Miller offers a helpful tip: It takes about three weeks for your tongue to stop missing the taste of salt, Miller says. After that, prepared food that isn’t low sodium will start to taste too salty.