When It Comes to Change, No One Is Immune to the Effects 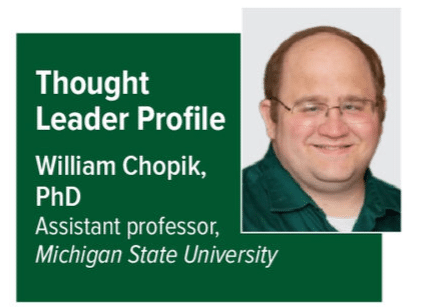 Around the new year, many people set resolutions to end or start new habits. But can we really change who we are—our personality?

William Chopik’s research says yes. Not only does your personality change, but the way you feel about aging—and the way others around you regard age—changes.

Chopik is a social-personality psychologist with multiple publications on how relationships and the people in them change over time and across situations. He is also director of the Close Relationships Lab research group at Michigan State University (MSU), where colleagues and grad students investigate topics such as how couples change and influence each other and late-life issues.

His research on gratitude across the lifespan recently won the Mather Institute Innovative Research Gold Award.

This interview was edited for length and clarity.

Q. Some people may say they’re too old to change. Is this true?
A. It’s possible to change your personality at any point in life.

It was sort of a myth early on in personality research—this assumption that after you turned 30, nothing new happens. You don’t really change very much. Luckily, there have been numerous studies that show people keep changing across their lives.

There are two main theories about why you change. One is that it has to do with your biology: your genes, how your brain develops. Another theory has it that your personality changes because of stuff that happens to you; you get married, you get divorced, you start a new job.

There’s also a third, called volitional change, which basically means you can change if you want to. We have a few papers on that showing that indeed, if you want to change, it’s possible to do so.

It’s kind of fun; we’ve done intervention studies where we give people homework to try to change the personality. If you’re a shy person, we assign you homework to reach out to connect with friends.

And we find the answer is yes, you can change your personality, but it takes work. Like most things, you have to realize that there’s a problem, then take active steps.

Q. What about your empathy study, where people ended up changing more than they thought they would?
A. That started out as a study for people who wanted to connect with other people in a more meaningful way, to get better at empathizing with their friends and family.

At the start of the study, we asked if people wanted to get better at taking other people’s perspectives or having more sympathy or warm feelings. If they said yes, we followed that group every week for four months, asking about their empathy.

And they became more empathetic—like I said, if you want to change a certain way, you can achieve that.

But another strange thing happened. We were measuring political attitudes as well. And we found that people who became more empathetic started to endorse more liberal political views. They didn’t say they were going to vote for a Democrat, I want to clarify. But they started caring more about vulnerable groups, trying to protect people from harm, and focusing less on power structures.

Q. What about your gratitude studies? So many people are finding gratitude important to their well-being these days.
A. We’re doing a lot of that work right now. One good thing is that it looks like people become more grateful over time—as they age, they’re more grateful for more things about their lives.
What’s behind that may be that there are theories that as you age, you start to focus on things that bring you happiness and emotional balance and spend less time on superficial stuff like trying to form business connections.

It looks like some of those interventions where people list things to be grateful for before they go to bed, or write gratitude letters, have the potential to increase gratitude.

But one question is how long do you have to do something like that? Every day for 50 years? It looks like, in the short term, it’s largely a good thing. It makes people happier. But it’s not clear how long-lasting those things are. If you stopped and didn’t do it for a week, do you go back to where you were before you started? It’s kind of like a muscle, or it seems that way.

Q. What about changes in attitudes toward aging?
A. One thing that has always been fascinating to the Lab is negative attitudes about older adults. Everyone becomes older. There will be more older adults than ever before for the next 10 or 15 years.

Don’t you want to build the kind of society that will be welcoming to you in the future? One of the great ironies of doing this type of research is that we don’t really get why these attitudes are so persistently negative.

We are doing some intervention work to see what can make people more positively disposed. Previous experience, knowing more older adults, interacting more with grandparents—this helps create more positive attitudes. That’s called the contact hypothesis: If you simply have contact with a group that people think negatively about, your attitudes should improve. It looks like that will ultimately be the most powerful intervention, but there are other theories.

One is about countering stereotypical examples: If you saw an older adult run an ultramarathon, maybe you would believe older adulthood is full of possibilities. Another is perspective taking, where we have people think about what it’s like to be an older adult. Another is priming things: Can you override the way people associate words and ideas about older adults? But it looks like these are not good ways to change this. It looks like contact is driving good attitudes.

It can vary quite dramatically. The really interesting thing is that these attitudes are linked to how sick older adults are, how long they live, and how much they spend on Medicare per person.
If the goal is to build a more inclusive society, where people feel welcome and accepted and feel like they can move about their environments, it looks like some places need more work than others at the moment.