ALEXANDRIA, Va. – Across senior living there are inspiring individuals who are dedicated to advancing the industry and those who show a profound commitment to the residents they serve—those who truly embody the heart of senior living.

This week at the Argentum Senior Living Executive Conference, Argentum recognized two Changemakers, Sylvia Mackey and Ed Kenny, for their dedication to advocating on behalf of seniors and the senior living industry. This evening, Argentum will also honor Bill Sheriff for his longtime commitment to senior living with the Argentum Distinguished Service Award.

Sylvia Mackey is the co-founder of the John Mackey Fund, Inc., a 501(c)(3) organization, which supports funding efforts and research for frontotemporal dementias (FTD). Sylvia met her husband, John Mackey, a former tight-end for the Baltimore Colts, while both were attending Syracuse University. In the early 2000s, Sylvia noticed escalating unusual behavior from John; shortly thereafter, he was diagnosed with FTD. In 2006, Sylvia requested help from the NFL in what became known as the “88 Plan,” a reference to her husband’s jersey number with the Colts. The plan provided funding for former NFL players receiving care due to brain injuries in long-term care communities or at home. John Mackey passed away in 2011, but Sylvia’s fight for advancing awareness and research for brain injuries and disease continues. Argentum is honored to recognize Sylvia as a Changemaker for senior living and was pleased to welcome former Houston Oilers/Tennessee Titans left tackle, Brad Hopkins, to present the award.

“I am truly honored [to be] recognized as a Changemaker,” said Sylvia Mackey, “It stemmed from what my husband always said—when there is a change that has to be made, somebody’s got to do it. When I saw so many former NFL players, our foundation players, diagnosed with Alzheimer’s, dementia, ALS and Parkinson’s, I realized that something had to be done to help them financially and to help their families financially and emotionally. My plea to the League through Paul Tagliabue, which resulted in the 88 Plan, made a great change in my life and in the lives of so many others.”

Ed Kenny is the chairman and chief executive officer for Life Care Services (LCS). As a company, LCS is committed to servant leadership, promoting the growth and well-being of people by sharing power and putting the needs of others first. Kenny has shown the power of his leadership while addressing proposed legislation that would have widespread unintended consequences for seniors in Florida. Kenny engaged in efforts to meet with regulators to advocate on behalf of seniors and the industry at the Florida state capitol, he led weekly calls with Argentum state partners, and he worked with other industry stakeholders including Florida Argentum, LeadingAge, and the American Seniors Housing Association. These efforts among many others have significantly supported the effort in moving toward a better resolution to benefit residents and senior living providers alike in Florida. In appreciation for Kenny’s tireless efforts, Argentum is pleased to honor him as a Changemaker.

“I’m truly honored to receive this recognition,” said Kenny. “It is important that we continue to work together in the industry to advocate for the best possible outcomes for those we serve.”

Following a nearly 30-year career in the truck stop business, Bill Sheriff began his career in the senior housing industry in 1984 leading the American Retirement Corporation (ARC). While at ARC, Sheriff devoted his time to learning about resident and consumer needs and preferences, recognizing emerging trends across the market, and promoting research and innovation for the future. As a result, ARC became a senior housing trailblazer and Sheriff himself emerged as a leader in developing health and wellness programs for aging adults. He was also dedicated to advancing research in the industry, leading an effort to collect case studies and financial data from senior living communities long before the importance of gathering and sharing industry data was recognized.

In 2006, Sheriff became the co-chief executive officer of Brookdale during the company’s merger with ARC. After 28 years in senior housing, he retired from Brookdale as chief executive officer in 2012, but continued contributing to the industry as a consultant for Brookdale and as a board member until 2014.  In recognition of Sheriff’s longtime commitment and dedication to the industry, Argentum is honored to present him with the Argentum Distinguished Service Award.

“With his unwavering focus on serving residents and associates, Bill exemplifies the spirit and meaning of dedicated servant leadership,” said Andy Smith, Brookdale’s chief executive officer. “The contributions he has made to senior living have been profound, and his insights continue to pave the way for our industry.”

Argentum also recognized the emerging visionaries selected as Senior Living Leaders Under 40, a new 2017 Argentum recognition program. Featured in Issue 2 of Senior Living Executive magazine this year, the honorees represent leaders who are industry trailblazers, paving the path toward a better future for senior living.

“It’s such a pleasure to recognize the talented members of this inaugural class of Senior Living Leaders Under 40,” said Bill Pettit, chair of the Argentum workforce development committee and president of the R.D. Merrill Company, parent company of Merrill Gardens. “The commitment and enthusiasm of this diverse group, representing a wide range of disciplines, gives me great hope for the future of senior living. As we have studied workforce development, it has become clear that the success of our industry is highly dependent on finding visionaries to attract and train the next generation of leaders.” 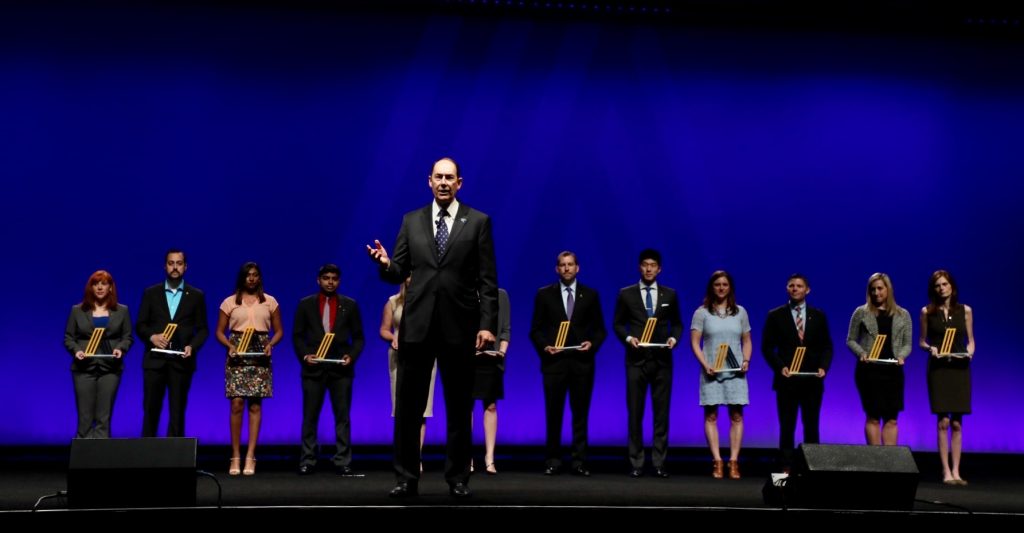 The 2017 Argentum Senior Living Leaders Under 40 are: