Study: Aging Population Will Have Profound Effects on Housing Demand

Growth in the nation’s adult population will drive significant household growth over the next decade and beyond, according to the just-released State of the Nation’s Housing: 2016 from Harvard University’s Joint Center for Housing Studies.

Demographic changes will drive the addition of more than 13 million households from 2015 to 2025. Much of the growth will occur among retirement-aged population with the number of households age 70 and over projected to rise by more than 8 million, or more than 40 percent. The increases will push up the share of older households from 16 percent in 2015 to about 21 percent in 2025. 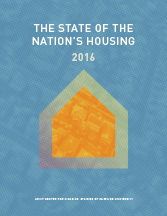 “The aging population will have profound impacts on housing demand,” reads the report, which also found: