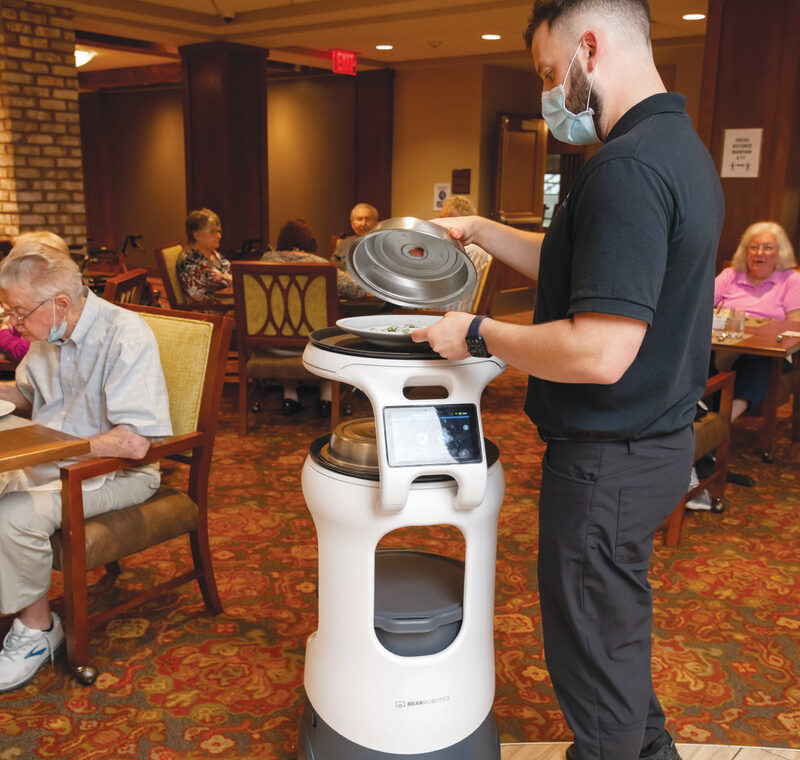 When Lenbrook, a senior living community in Atlanta, partnered with Morrison Living to introduce a robot to provide support to dining services staff as part of a beta test, the community—naturally—named the robot “Lenny.” And Lenny the Robot immediately attracted attention from residents.

“There was so much interest in seeing this little robot scooting around the community,” says Felecia Sveda, vice president of hospitality services for Lenbrook.

In response to that curiosity, Lenbrook held a show-and-tell session with interested residents.

The robot was then added to support the service in the community’s bar area. Staff members hand off newly prepared drinks to Lenny, who delivers the beverages to residents at other dining venues on the property.

Before long, Lenny went from a novelty to a highly visible member of the community.

“I think the residents really were looking at it with surprise and awe at first, not really sure what this thing was going to do,” Sveda says.

“They were pleasantly surprised seeing that it didn’t disrupt the services that they were experiencing in our club—and it actually expedited the service of the drinks.”

Robotics are among the most prominent of the sophisticated tech tools that are starting to transform dining services in the senior living field. Increasingly, the tools are becoming more accessible—and therefore more naturally integrated into the daily operations of senior living dining.

Both senior living community representatives and service providers see a vast world of fresh possibilities for tech tools in dining in the years ahead.

Culinary Services Group introduced a robot to provide dining support at the Springwell Senior Living Community in Baltimore, delivering food from the kitchen to tables.

Carolyn Wescott, director of innovation for CSG, says CSG decided to explore the use of service robotics to gauge if it could bolster the dining program without hiking labor costs.

“After seeing their application in the retail space, it was clear to us that a service robot would be able to complete repetitive, predictable, and often time-consuming tasks that distract our team members from either improving food quality (increasing scratch cooking, garnishing, etc.) or resident engagement,” Wescott says.

Similarly, Sveda says the introduction of Lenny at Lenbrook was designed to allow the community “to play a little bit with our staffing pattern.”

“We are a very high-touch field,” Sveda says. “We are not looking to replace our staff, but we are looking for ways to be more efficient. And so what we were able to do is reallocate a busser position or a runner position, and instead allow our staff to be interacting with the residents.”

The Springs Living, which is based in Oregon, piloted its robot program for delivering food to dining residents at one of its 18 communities in August last year and now has robots in eight communities with the intention to add more, says Brenda Connelly, chief operating officer.

“We have seen improved service times and food quality outcomes using the robots, especially during slow times and low-volume service periods when we typically would have less staff available,” Connelly says.

“Food gets sent from the line to dining room when it’s ready versus waiting for a server to retrieve the food. Faster service means hotter food and happier residents.”

Based on the results so far, Connelly says, “we anticipate that the program will continue to grow and evolve in the coming months and years.”

LG’s CLOIi ServeBot is among the emerging robotics tools designed for dining support. The autonomous unit uses multiple cameras and sensors to navigate complex environments, carrying up to 66 pounds of goods on three shelves.

Kimberly Regillio, senior manager, public relations for the company, says the ServeBot is meant to augment the existing dining service workflow—not to replace it.

Robots excel at managing repetitive, menial tasks, she says. The dining operations at senior living communities are among the natural fits for robots, she says.

“This enables an improved customer experience, with their needs being met more consistently and timely. Such workflow improvements are especially critical in senior living, where some residents may need additional attention.”

“By having a robot to deliver food and send dishes back to the dish room, it allows our servers to focus their energies on the front of house and with residents,” she says. “Plus, it’s a fun technology.”

Connelly says The Springs has calculated that the robots are saving each server more than two miles of walking each day, based on an average of 100 meal deliveries daily in each community. “This gives servers more time and energy to devote to their relationships with residents,” she says.

The Springs has determined that each robot replaces approximately 4.5 to 6 hours of labor per day. Based on a monthly cost of $999, Connelly says, “we only need to replace 2 to 2.5 hours a day of staff labor to break even.”

“There is also no overtime and no scheduling restrictions for the robots,” she says. “They can work any shift, seven days a week.”

Wescott says CSG’s testing of robotics has been limited to one location so far, but the company plans to expand to up to 10 locations this year.

“We’ve just started working with a company, PUDU Robotics, out of China, which offers a self-set-up, purchase-only program which may enable us to deploy service robotics to locations even faster than we had initially anticipated,” Wescott says.

Wescott says robotics appears to have a bright future in senior living.

“As robotics become a normal part of the landscape, I expect to see more social engagement robots (with larger interfaces allowing for video calls with family, friends, and even tele-health providers),” she says. “From a strictly food service point of view, we hope to see robotics become a normal and routine part of our staffing model and less of a novelty.”

Regillio believes more basic labor tasks will fall within the purview of robotics in the future as they grow increasingly sophisticated. That will allow humans to focus on creative, value-added tasks, she says.

“For dining services specifically, once the cost and process of food production is reduced sufficiently, senior living operators can look at including new types of foods on menus,” Regillio says.

“Plus, operators can craft more engaging atmospheres in the dining service space itself. Food is and should be, fun, and robots can streamline dining experiences so that humans can focus on the fun.”

Sveda says Lenbrook did some testing early with Lenny to determine that the “runner” position was the best fit for the robot, but the community is starting to explore what other possibilities might be a good fit for the tool.

“We are looking for ways that do not impact the high touch [service] but could make us more efficient on things that would not impact resident interaction,” Sveda says.

Compass Community Living has about a dozen Servi robots in its partner communities throughout the country, with more on order, says Phillip Dopson, senior vice president, consumer experience, design, and retail at the provider.

“We’ve had some great success with a robot in the dining room as a server assistant, busser, and host,” Dopson says, reporting that the robots ease the workload for associates and have been well received by residents.

Robots even could become involved in food prep. Sally, a robot offered by Chowbiotics by DoorDash, creates on-demand salads, bowls, and snacks, drawing on an assortment of up to 22 ingredients.

The 3-foot-by-3-foot machine is in hundreds of hospitals, college campuses, and grocery stores, and its owners have plans to expand its use to restaurants and other venues, according to Restaurant Business magazine.

Robotics is only one of the tech tools being integrated into senior community dining services, and Lenbrook offers a telling example. For instance, the community added an app for reserving tables in dining facilities for its residents while continuing to offer the option to call or email in a reservation request. Over the past four months, 40 percent of reservations were made with the app.

As did many communities, Lenbrook implemented the use of tablets for servers during the pandemic, speeding service time and improving the efficiency and accuracy of orders, Sveda says.

The community is now exploring a kiosk in its casual dining venue that would allow residents to use self-service to order meals for either takeout or dining in. Both efforts align with searching for ways to allocate staff where they are most needed for service.

Sveda believes Lenbrook eventually will give residents the opportunity to use mobile ordering to order from the menus of any of the community’s five dining venues, no matter which one they are dining in.

“Technology can be an effective bridge between resident, family, and service provider—making communication more efficient, clear, and actionable.”

“Food is, and should be, fun, and robots can streamline dining experiences so that humans can focus on the fun,” says Kimberly Regillio, senior manager of public relations for LG.

TIPS AND CONSIDERATIONS FOR DINING-SERVICE ROBOTICS

Test for resident responses: Introducing residents to new tech tools is one of the chief challenges that accompanies the adoption process. Culinary Services Group’s Wescott says residents at Springwell adjusted quickly to the introduction of robotics to the dining landscape—some even embraced it.

“As with any new technology, there are early adopters, general acceptors, and those who hold out,” Wescott says. “Most residents were positive or neutral in their response, with very few if any responding negatively to the robot. Many residents attempted to engage with the robot, name it, and asked if it could do more.”

Connelly says resident feedback for robots at The Springs has been “extremely positive.”

“[Residents] have expressed a lot of genuine curiosity and joyful reactions in response to the robots in our dining rooms,” Connelly says.

“Many of the residents share their delight with their families and grandchildren by sending them photos of the robots. Staff, too, have given us a lot of positive feedback, telling us it gives them more time to spend engaging with the residents.”

Anticipate adapting work methods: “The robots are easy to operate but using them requires a shift in workflow and process,” Connelly says. “There is some adjustment necessary on the part of the servers as they learn to work with their new robot helpers, but that’s to be expected.”

Watch out for costs and infrastructure needs: Wescott says cost is the largest obstacle to adopting sophisticated tech tools.

“Many of these technologies are either emerging or well established but require some level of infrastructure to be supported,” Wescott says. “I find that even well-established senior living communities can be slightly behind the technology and tech-infrastructure (Wi-Fi, electronic displays, networked TVs/Smart TVs in rooms, community apps).

“Establishing the infrastructure and also investing in new software or cloud-based systems comes at a cost which may be difficult to rationalize if the current system or process seems to be ‘getting the job done’ or the new technology establishes a new service level altogether.

But these are differentiators for communities, and in an increasingly competitive market we see these as important opportunities to bring to our clients.”

Put thought into easing the transition: Sveda says Lenbrook is determined to embrace the use of more technology in its community, but it also wants to ensure it doesn’t leave any residents behind who are unwilling or unable to adopt certain tech tools.

“So, for us, that creates a little bit of a challenge in that sometimes we’re running dual systems—a paper system and a more high-tech system,” Sveda says. “And we’ve got to figure out how to do that so that we don’t leave anybody out.”

Because whatever the challenges, navigating them ultimately seems an inevitable part of progress. As Sveda says, ignoring new tech tools isn’t an option.

“We are never going to be pioneers in the field of technology in senior living, but we can’t shy away from it,” Sveda says. “It’s not going anywhere.”