Untangling the Mysteries of the Brain 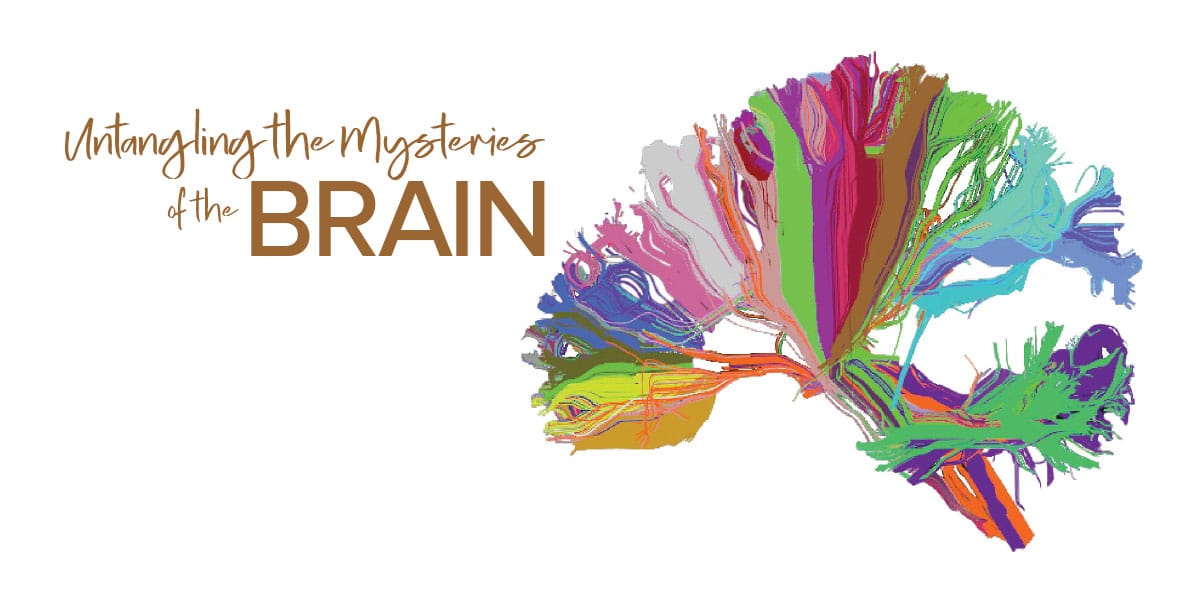 The Dutch centenarian Hendrikje van Andel-Schipper astonished scientific researchers both in life and in death: When they performed cognitive and psychological tests on her at the age of 113, they found that her mind performed better than most 60-75 year olds. A subsequent autopsy of her 115 year-old brain in 2005 revealed that it was completely free of any dementia-related diseases associated with “old age.”

“I think what people call ‘brain aging,’ doesn’t exist as such,” said Dr. Cyrus Raji, an assistant professor of radiology at the Washington University School of Medicine in St. Louis, who points to Andel-Schipper as an example. “Brain aging is an artifact of the pathologies that accumulate throughout life.”

Raji’s statement is provocative, but his point is that lifestyle and life events are major contributors to our brain health. Andel-Schipper used to joke that she managed to stay healthy at such an advanced age because she ate herring every day and drank limited amounts of alcohol—usually a glass on Sundays and holidays. The doctor also points to Andel-Schipper’s active lifestyle as a major contributor to her healthy brain, or her “cognitive health.” She walked several miles a day for much of her life. Like a lot of Dutch people, she biked everywhere and never owned a car. Because Andel-Schipper had donated her body to science, researchers subsequently found that her genetic makeup also helped.

“The concept that Alzheimer’s disease will inevitably destroy people, we can show, is not always true, and we can actually do something to prevent and reduce the risks of the disorder,” Raji said in a 2017 lecture at the Silicon Valley Health Institute talk on his work in radiology, dementia, and brain imaging.

A growing body of research suggests that reducing risks of developing dementia—or at least slowing its progression—can be accomplished through diet and exercise. Some researchers say specific diets and exercise regimes can to a limited extent restore brain health. Human biology and the brain are complex systems that interact with their environments, though. No scientifically rigorous studies have definitively proved that dementia is 100 percent preventable.

Some aspects of the research findings are easier to implement than others, said Joel Kroft, executive director of memory care programs at Country Meadows Retirement Communities in Hershey, Pa.

“The tricky part is how you put it into play,” he said. “More and more research is coming out about physical activity and movement delaying disease and improving cognitive outcomes. We can build that into our days in simple ways. For instance, when we’re doing activities, our teams and the residents can get up and walk to another area of the neighborhood to do the next activity.”

But trying to change the dietary habits of residents with dementia presents more of a challenge. People experiencing dementia who are used to eating meat and potatoes generally aren’t interested in converting to the healthier Mediterranean diet dominated by vegetables, fruits, nuts, unprocessed whole foods, and fish. But the most engaged service providers work to constantly update themselves with the latest research so that they can help residents and their families manage dementia’s progress and impact.

Belmont Senior Living has started exploring opportunities to work with the Buck Institute for Research on Aging in California and the Mayo Clinic, said Sheri Easton-Garrett, Belmont’s senior vice president of clinical services. It also encourages residents with dementia and their families to enroll in clinical trials. The company is working with UCLA Longevity Center Director Dr. Gary Small’s team to recruit residents to participate in a large new, multi-site clinical trial of a 12 week-treatment of Prazosin, a blood pressure control drug that has the potential to mitigate disruptive behavior common to some types and stages of Alzheimer’s disease. The National Institutes of Health is funding the study.

Perhaps Andel-Schipper’s story is so compelling because it’s not something that doctors or the general public generally would expect. Autopsies of seniors have revealed that many people’s brains can still accumulate the pathological proteins that cause Alzheimer’s disease—yet in life they never manifested any symptoms. And society assumes that an aging brain wears out like the rest of the body: It’s no coincidence that the average age of an Olympic athlete is between 23 and 24.

But neuroscientists have found that brains are remarkably resilient and continually adapt to circumstances. It often rewires itself to compensate for some of its own developing deficits as we age. Diet, sleep, and physical and vascular health are key to maintaining brain volume, and brain health.

Senior living providers try to help residents wherever they are along the health spectrum. Country Meadows encourages residents who have just been diagnosed with Parkinson’s to enroll in physical exercise regimen called “Delay the Disease,” a system developed by a personal trainer and a nurse in Ohio.

The Life and Death of Neurons

Eighty-six billion cells called neurons pack a human’s three-pound brain, and at least 100 trillion synapses enable electrical and chemical communications between each neuron’s communications sender the axon, and the adjacent neuron’s receiving mechanism, the dendrite. It is the life and death of neurons and synapses that affect our cognitive abilities. The hippocampus, an inner area of the brain that’s shaped like a seahorse, controls our various kinds of memories. Damage to both the neurons and synapses in our hippocampus impairs our ability use our memories to function normally in everyday life.

Neurons in healthy brains don’t die off in significant numbers during the aging process, but they do lose a few synapses. How many varies with the individual, explain scientists in “Cognitive Aging,” a book published by the Institute of Medicine of the National Academies. The brain adapts by strengthening the capabilities of the remaining synapses, but it is neurons’ routine loss of some of these synapses that lead to not being able to remember as well later in life the names of places you visited a few years ago, what you went to the kitchen for, or the name of someone you met recently.

Scientists also have discovered that genes affect the way brains develop during an individual’s life, and are one of many factors affecting chances of either retaining a very good memory over time, or developing dementia. Various normal age-related changes to brain mechanisms can lead to shorter attention spans and slow the speed at which we process information, but the rate depends on many factors within individuals’ lives affecting their physiology.

The ability to use memories is just one component of brain function. When brains age well—or maintain most of their functionality as time goes by—it means an individual should be able to maintain the ability to temporarily store information necessary to complete a task. People lose these and other capabilities in a dramatic fashion over time when disease damages and kill their neurons—for example, when abnormal levels of proteins known as amyloid-beta and tau accumulate in brains as a result of Alzheimer’s disease, the most common form of dementia.

Researchers describe amyloid-beta accumulating into clumps outside of neurons, and tau forming “tangles” inside of them. When they eventually kill enough neurons, capabilities diminish—initially in the hippocampus. This part of the brain shrinks, and that’s when the classic symptoms of Alzheimer-related memory loss start to manifest.

The example that actress and activist Marcia Gay Harden described in a congressional hearing on Alzheimer’s disease last June and in her memoir “Seasons of My Mother” illustrates this. She describes a scene in the early 2000s on a flight to Canada to attend a celebrity ski charity event. Harden’s mother Beverly kept putting her passport away when she was seated in the airline cabin next to her daughter, forgetting where she put it, and then started searching for it, repeating the process over and over again. Beverly refused help from her daughter. Harden said her mother realized that something was wrong, but that she herself didn’t think anything of the incident at the time. The younger Harden then described another later incident in 2007 while preparing for an awards ceremony where her mother repeatedly forgot which dress she had picked out to wear. A doctor diagnosed Beverly with Alzheimer’s disease in 2011 at the age of 74. She died over the 2018 holiday season at age 81.

Continue reading "Untangling the Mysteries of the Brain"...
READ MORE