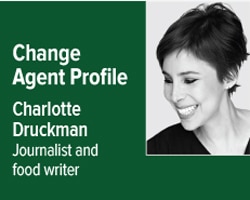 One of the first selections in Women on Food: Charlotte Druckman and 115 Writers, Chefs, Critics, Television Stars, and Eaters is a conversation with legendary writer and food historian Betty Fussell (New Yorker, Food & Wine, and the memoir My Kitchen Wars).

“I began writing food articles in 1960 for Travel & Leisure, because we were traveling so much,” Fussell says, looking back on how it was for her starting out as a woman writer. “And that’s when I had to appear first as B.H. Fussell, because you couldn’t get published as a woman any more than M.F.K. [Fisher] could. Publishing belonged to men in every sense, but everything did.”

At 92, Fussell talks frankly about cooking in her “closet kitchen” in her senior living residence, riding on the community van to the farmers market, and working on her current book, entitled How to Cook a Coyote.

That’s just one woman among 115. Druckman’s 400-page collection, called “sharp, witty, and entertaining” by The Guardian, is full of moments like that, from noted food journalists, chefs, and restaurateurs such as Soleil Ho, Nigella Lawson, Rachel Ray, and more.

Druckman, who has written two cookbooks in addition to journalism and essays, is known for writing about the creative women in the often male-dominated food world. In a phone interview, she covers a full table of topics.

A. So much of the stereotype has been that your job as a woman is to cook to feed other people. That is a beautiful thing, but it shouldn’t be something that’s expected or enforced because of your gender. I think it’s a really lovely way for people build community, to cook together.

Nigella Lawson gets into that idea of the importance of being able to feed yourself, that individual sustainability is so important.

In the book, the Emily Gould essay called “Who Cares?” She talks about when she used to love to cook just for cooking’s sake, for her and her husband. But when she had kids, she was spread so thin that she felt as though she were being told she wasn’t allowed to prioritize the pleasure part of it.

So when you’re older, it might be a time to rediscover that pleasure and redefine your relationship to cooking.

Q. How do you find attitudes toward cooking and food differ generationally?

A. To a degree for Gen X, but especially for boomers, I think some women resisted cooking because of the feminist movement —feeling like, I’m not going to do that, because that’s what I’ve been expected to do. There are also a lot of women who were still cooking for their families, either because they had to, or because they just really liked it.

Interestingly enough, for both of those types of women, I think getting into the kitchen when they’re older could be great. I think it’s never too late to learn. And if it’s something you cut yourself off from, it might be something that’s fun to come back to now, when you don’t feel like you have to do it. You can enjoy it.

Q. Some communities put out their own cookbooks. What advice would you have, and what do you think makes a good cookbook?

A. I’m very much about a cookbook being functional. I want a cookbook to be something that you can use. If it’s meant to be more of an archive or a historical document, I’m not saying that’s a bad thing, but it stops being a cookbook on some level.

I also think that having a story behind each of the recipes, so that we understand why it’s in the book, is pretty meaningful, especially when it’s a book where you have multiple contributors. Tell us who you are. Tell us why this recipe.